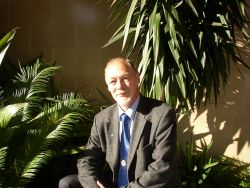 On request of the German Liaison Group composed by BDVI and DVW, the CLGE Ex-Board has nominated Past-President Klaus Rürup as Honorary member of CLGE. The first General Assembly, gathered in Strasbourg on 19 September 2008 voted unanimously in favor of this appointment. Klaus Rürup is the third person honored by this distinction after Paddy Prendergast (Ireland) and Vaclav Slaboch (Czech Republic).
Back