FGF has a new President 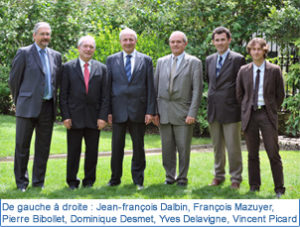 The new Bureau of the Federation of French-speaking Surveyors (FGF) was elected during the General Assembly that took place in Prague October, 9th 2009.

François Mazuyer, OGE 1st Vice-President, was nominated President. He succeeds Alain Gaudet for the next four years. Following Alain Gaudet’s initiatives, support to African countries will be given priority.