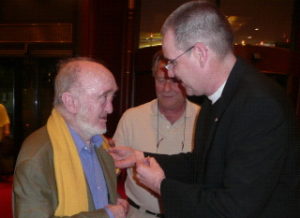 On 6 May 2010, Albert Jacquard addressed the Bucharest Conference with a remarkable speech.

The well known French Engineer, Geneticist, and Philosopher gave his very personal view about the role of the European Surveyor. Footage will be published soon.

The whole conference thanked him with a long and heartily ovation. Here you can see him with Jean-Yves Pirlot and Francis Goossens giving him a CLGE Pin as a symbol of the Committee’s reconnaissance.