President Van Rompuy acknowledges the House of the European Surveyor and GeoInformation! 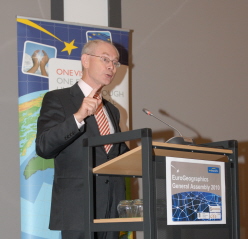 During the General Assembly of EuroGeographics in Brussels, from 11-13 October 2010, Mr. Van Rompuy, President of the European Council, has welcomed the move of our sister organization to Brussels:

“I think you [EuroGeographics] made a good choice as an association to move closer the European Commission, in the House of the European Surveyor and Geo-Information which was opened yesterday [10.10.2010]”