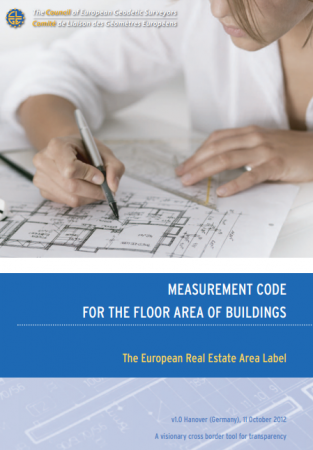 This Measurement Code for the Floor Area of Buildings was created by CLGE1 between 2008 and 2012. It was developed with the close cooperation of domain experts from the European Commission and the Belgian Cadastre.

In April 2012, a European Commission officialhas recognised the code as a ‘Visionary Cross Boarder Tool for Transparency’ and,of course, we fully agree with him.

During the III CLGE Conference of the European Surveyor, on the 11th of October 2012, in Hanover,the codewill besolemnly presented to the general public and the press.

From then on it should be used as a European cross border quality label by the European surveyors and all interested parties. Therefore it will be strongly advertised and promoted via the initiative called  euREAL for‘European Real Estate Area Label’.

The code was conceived as a platform for further improvement and cooperation with other bodies especially the European Commission.This plan has already been successful, since the INSPIRE Thematic Working Group on Buildings has adopted the measurement code as the default description for areas in buildings. This was endorsed by the European Commission on the 11th of April 2012 and our approachisnow part of version 3.0of the INSPIRE Data Specifications.

Moreover, following the integration of CLGE work in this European Directive, JRC2 has asked the European normalization body CEN to set up a New Work Item Proposal for area, spaceand volume measurements in buildings, in cooperation with CLGE.Hence, CLGE will coordinate the planned additional work about volumes in buildings with CEN.

Europe needs harmonizing and simplifying initiatives to grow and to become more competitive. I am convinced that others will join us in our quest. Let’s give euREAL a real chance.