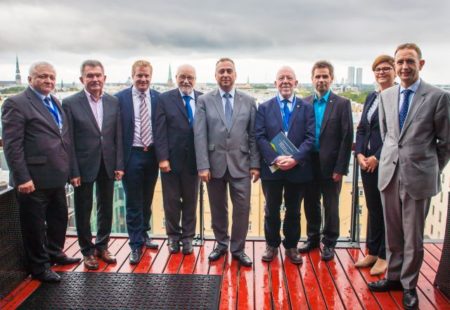 During the General Assembly held in Riga from 22 to 24 September, the new Executive Board was elected. Maurice Barbieri (CH) was unanimously elected as President alongside with a few of his VP, i.e. Mairolt Kakko (EE), Duncan Moss (UK), Nicolas Smith (FR). Newcomers are Muiris de Buitleir (IE) and Vladimir Tikhonov (RU). Vasile Chiriac (MD) and Dieter Seitz (DE) were respectively unanimously confirmed respectively as Secretary General and Treasurer. On this picture, you see them on the famous balcony of Hotel Albert (Einstein) in Riga, from left to right: Vasile, Vladimir, Nicolas, Dieter, Maurice, Muiris, Mairolt, Diana, Duncan. Two VP left the team, respectively after two and one terms, Danko Markovinović and Pekka Halme. The General Assembly warmly thank them for their commitment. Diana Bečirević is not a board member as such, but she represents the FIG Young Surveyors European Network in CLGE and vice versa.
Back