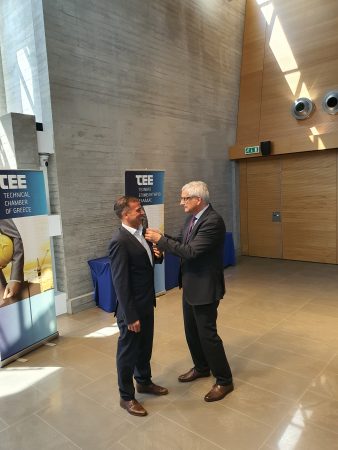 This was our second recent CLGE General Assembly in Athens. It is now over, and we already miss the city of the owls.

CLGE organised a very successful General Assembly in Athens (GR) from 4th to 5th June 2021. Despite the prevailing difficult conditions, CLGE Vice-President Michalis Kalogiannakis did a great job in organising the event.

Fifteen Members were able to join us in person in Athens, while 30 Members took part online. These 45 Members represented 30 countries. All in all, this is a very good result.

Mr Bernhard Richter, Vice-President for Geomatics at Leica Geosystems, took part in his first but certainly not his last GA. Bernhard confirmed that he had a great time with us and is looking forward for an even closer cooperation.

All the presentations are online and most of them are freely accessible for all interested people, they can also be download in bulk as a single zip file from here.

The GA gave the opportunity to underline some major topics, which were also presented during a special CLGE Seminar, embedded in the Annual Congress of the Hellenic Association of Rural Surveying Engineers HARSE which took place on 3rd June prior to the GA.

After a general presentation about CLGE by President Vladimir Krupa, Blaženka Mičević presented the CLGE Theme of the Year: Women in Surveying, followed by CLGE Secretary-General Vladimir Tikhonov unveiling the first results of the long-awaited study on “European Requirements for Property Surveyors”. Matjaž Grilc, Chair of the CLGE Interest Group for Publicly Appointed and Regulated Liberal Surveyors, presented the latest news from his group, including an interesting study on the role of Property Surveyors in Condominiums. CLGE Director General Jean-Yves Pirlot gave first insights in the brand-new European proportionality test, recently transposed in many EU Member States.