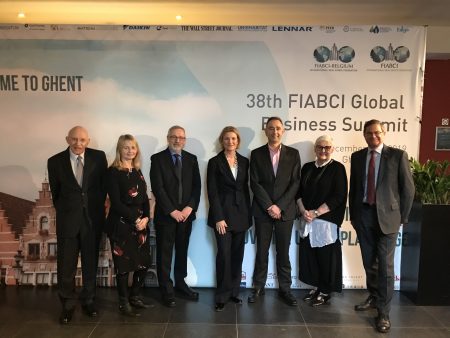 CLGE participated in the 2019 Trustees Meeting of the International Ethics Standards Coalition in Ghent, (BE) which took place during and was co-located with the 38th FIABCI Global Business Summit.

The International Ethics Standards (IES) were first launched in 2014. Since launch the Coalition has now grown to its current peak of 133 Full Members and 150 Supporters worldwide.

A key focus of this 2019 Trustees Meeting was to discuss the review and revision of IES as proposed by the Standard Setting Committee (SSC) as well as its further implementation. The Office Bearers and Trustees present were also joined remotely throughout the day by conference calls with the Chair of the SSC and other Trustees.

CLGE Vice-President and IESC Trustee Mr Duncan Moss was present in Ghent and briefed the Meeting on a number of relevant CLGE activities in the context of CLGE having chosen 2019 as being the ‘Year of Professional Ethics’.

Duncan briefed on i) a CLGE session called ‘Strengthening professional ethics in the land sector‘ at the Annual World Bank Conference on Land and Poverty in Washington DC (US) in March 2019 ii) the VI CLGE Conference of the European Surveyor in Istanbul (TR) which had the theme of ‘Professional Ethics, a landmark for geodetic surveyors’ which included a paper entitled ‘The International Ethics Standards Coalition, what is it and why is it important?’ and iii) The Istanbul Declaration on ethical principles for the profession of geodetic surveying.

The Trustees commended CLGE for its work in furthering the cause of ethical professional standards and helping to drive forward the adoption of IES. Duncan highlighted the point in the Istanbul Declaration regarding a future revision of the ‘FIG Statement of Ethical Principles and Model Code of Professional Conduct’ (1998) and ensuring it is IES compliant, this was very well received.

Duncan also discussed the increasing importance of ‘Sustainability’ to CLGE and its members. For example in August 2019 CLGE announced it would carbon offset its meetings in partnership with Atmosfair and held a Plenary Workshop on Sustainability at its General Assembly in Istanbul (TR) in September 2019