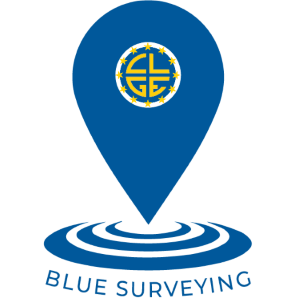 ‘Blue Surveying’ refers to the surveying and geospatial data management in all aquatic environments from deep oceans to inshore waters, to lakes, rivers and canals. Blue surveying supports life sustaining activities for example the water management necessary to deliver clean potable water, to sanitise wastewater and to irrigate crops. It also supports global trade, navigation, energy and leisure activities. It is easy to see why we have chosen Blue Surveying as our Theme of the Year.

The ‘blue environment’ affects all of us on planet earth irrespective of how near or far we live from water bodies. We are all dependent on the ecosystem services provided by the world’s rivers, lakes, canals and oceans for providing our food & water, transport, energy, trade and tourism. In the onshore environment the work of land surveyors supports critical water management activities such as the delivery of potable water, the sanitisation of wastewater, the irrigation of agricultural crops, flood mitigation schemes, renewable energy and spatial planning in proximity to bodies of water. In the near shore and offshore environments specialist hydrographic surveyors perform vital work that keeps ports operational, international trade flowing, protects coast assets and supports the safe operation of critical infrastructure.

In Europe alone we have 30,000 (linear) km of canals and rivers. Globally the world’s oceans cover 363 million square km, equivalent to approximately 72 per cent of the earth’s surface. More than 600 million people, around 10 per cent of the world’s population, live in coastal areas that are less than 10 metres above sea level many of which are threatened by rising sea level. We are already witnessing the managed retreat from or total abandonment of some of these communities, an issue that will become much more significant particularly over the next 50 to 100 years.

We are all adversely impacted by both chronic and acute problems in the blue environment such as pollution, industrial disasters such as oil spills, natural hazards e.g. tsunami, inexorable sea level rise and ocean warning which exacerbates climate change, causes coral reef bleaching and increases the spread of tropical diseases. Global warming is impacting polar regions in particular. This is leading to the opening of potential new trade routes in the Arctic, where temperatures are rising four times faster than the global average, bring with it concomitant geopolitical competition and friction. In the Antarctic the collapse of major ice shelves is a significant contributor to global sea level rise.

The need to address these existential issues will lead to an expansion in the need for blue surveying which in turn will require much greater numbers of skilled, experienced practitioners than we have at present. Historically the percentage of surveyors involved in ‘blue surveying’ has been around 3% compared to 97% working on land. Surveyors have an important role to play in the collection of marine and inshore geoinformation which is critical to many industries as well as the provision of Marine Spatial Data Infrastructure and Marine Cadastre. This is recognised by the United Nations for example in the formation of the Working Group on Marine Geospatial Information as part of the Committee of Experts on Global Geospatial Information Management (UN-GGIM). It is also recognised by the European Union for example as part of the INSPIRE Directive where hydrography and oceanography are key spatial data themes.

Did you know that surveyors are involved in the following activities which cover a wide range of interlinked established and emerging sectors:

Blue surveying is also critical to helping to deliver the UN Sustainable Development Goals (SDGs). In particular SDG 6 ‘Clean Water and Sanitation’, SDG 7 ‘Affordable and Clean Energy’, SDG 11 ‘Sustainable Cites and Communities’ and SDG 14 ‘Life Below Water’. We are currently analysing these SDGs in more detail to understand in which water and surveyors are involved.

Please keep an eye on our website and social media channels for activities relating to Blue Surveying throughout the year which will culminate with the VIII CLGE Conference of the European Surveyor, on Thursday, 27 October 2022 in the port city of Seville (ES) in conjunction with our autumn General Assembly.